“Begin at the beginning," the King said, very gravely, "and go on till you come to the end: then stop.”

This week has seen the start of rehearsals for our forthcoming production of Alice in Wonderland, directed by Mrs Wood and Mrs Wallwork it incorporates the classic magical Lewis Carroll tale with a musical modern twist. Having heard Olivia’s solo vocal audition for Alice, not a dry eye will be found in the audience on opening night.

Daniel (Charles Lutwidge Dodgson) with his commanding presence, gently weaves the story introducing us to an array of colourful characters including of course the unmistakable and unforgettable Tweedle Dum and Tweedle Dee (Jake and Elliot).

Alice in Wonderland would not be complete without The Mad Hatter (Connor) who not only portrays the character with comic genius but lights up the drama studio with his vocal contributions.

The Drama Club meet every Monday at 3.15 till 4.30 in the Drama Studio, with extra rehearsals as required and new members are always welcomed. For more information please see Mrs Wood (Pupil Intervention Team) or pop along to the next meeting! 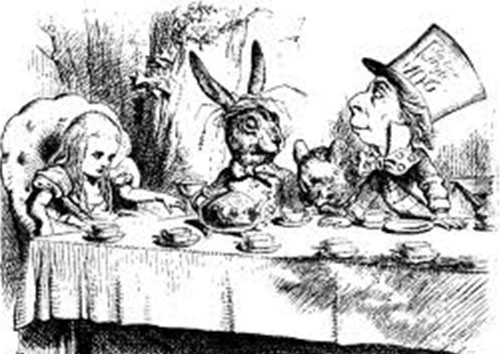